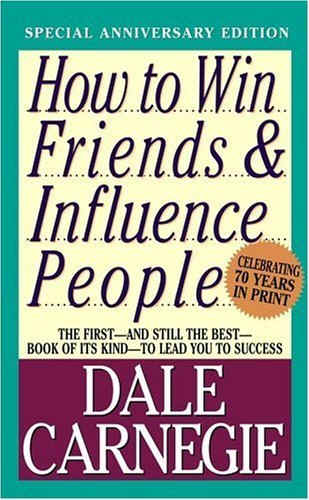 How to Win Friends and Influence People is a very famous book first published in 1937 by Dale Carnegie.  Carnegie was a college professor who taught courses in Effective Speaking and Human Relations.  After searching for years for a practical textbook to use in his courses, and not finding one, Carnegie took it upon himself to write his own.  How to Win Friends & Influence People is still used as the textbook for these courses today.  As Carnegie would have wanted it, the book has been revised multiple times since its initial publishing to better reflect the changes that have taken place in the world since the thirties.

Humans are creatures of emotion, not logic.  It is common and natural to get defensive when a person is criticized for decisions or mistakes made, regardless if they feel they were wrong in their choices or not.  When people are criticized, they strive to justify themselves in retaliation of their now wounded pride and sense of importance.  No matter how "constructive" this criticism may be, it still stings and leaves the person resentful towards the criticizer.  This first principle of part one talks about taking a different approach to criticizing, which says that instead of condemning people, we should try to understand them.  We should try to figure out why they did what they did.  This method breeds tolerance, sympathy and kindness.  We should try to see the situation from their point of view and be kind in our response to their action.

An example the book used is about a man named George B. Johnston, a safety coordinator for an engineering company.  One of his responsibilities was to makes sure the employees were wearing their hard hats when on the job in the field.  When Johnston would come across workers not wearing hard hats, he would remind them with a lot of authority of the rule and tell them that they have to put on their hard hats.  The employees would bitterly listen to him, but after Johnston left, they would often remove their hats again.  Johnston decided to try a new approach where he would sympathize with his employees, asking them if the hats were uncomfortable or not the right size.  He would then remind them in a pleasant tone that the hats were designed to protect them from injury and suggested the hats always be worn on the job.  The result was increased compliance to the rule, and no one resented him or was emotionally upset.

Principle 2:  Give honest and sincere appreciation.

I can tell you from personal experience that when a manager gave me an honest compliment for a job well done, I felt very good about my work and strived to exceed my expectations.  On the other hand, when a manager focused on criticizing me for any simple mistake they could notice and neglected the things I excelled at, I felt lesser of myself and gave up on trying to do well.  I didn't feel I was appreciated, and I didn't care to impress the higher positions.  I actually did less work out of anger from their lack of appreciation for the hard work I was putting in.

Principle 3:  Arouse in the other person an eager want.

This principle talks about focusing more on what others want, instead of what you want.  The chapter opens up humorously, saying, " I often went fishing up in Maine during the summer.  Personally I am very fond of strawberries and cream, but I have found that for some strange reason, fish prefer worms."  This analogy is to show that if you want the fish to bite, you have to bait the hook in their favor.  We should look at the situation from the other person's point of view as well as our own.  If we are trying to sell someone on an idea, service, product, etc., we should see it from their angle and express how they will benefit from what we have to offer.

The book tells of a story about a child that was underweight and refused to eat properly.  The parents took the usual method and tried to scold and nag their child.  "Mother wants you to eat this and that."  "Father wants you to grow up to be a big man."  When the father realized his son would not listen to his viewpoint, he asked himself, "What does that boy want?  How can I tie up what I want to what he wants?"  The father knew his son loved to ride his tricycle, and that every day, he encountered a bully a few doors down the street who would pull the little boy off the tricycle to ride it himself.  The father explained to the child that he would be able to wallop the daylights out of the bigger kid someday if he would only eat what his mother wanted him to.  There was no longer an issue with the child's diet.  The boy would eat anything to be big enough to whip the bully that was humiliating him so often.

Home > Even Better > How to Win Friends & Influence People Overview